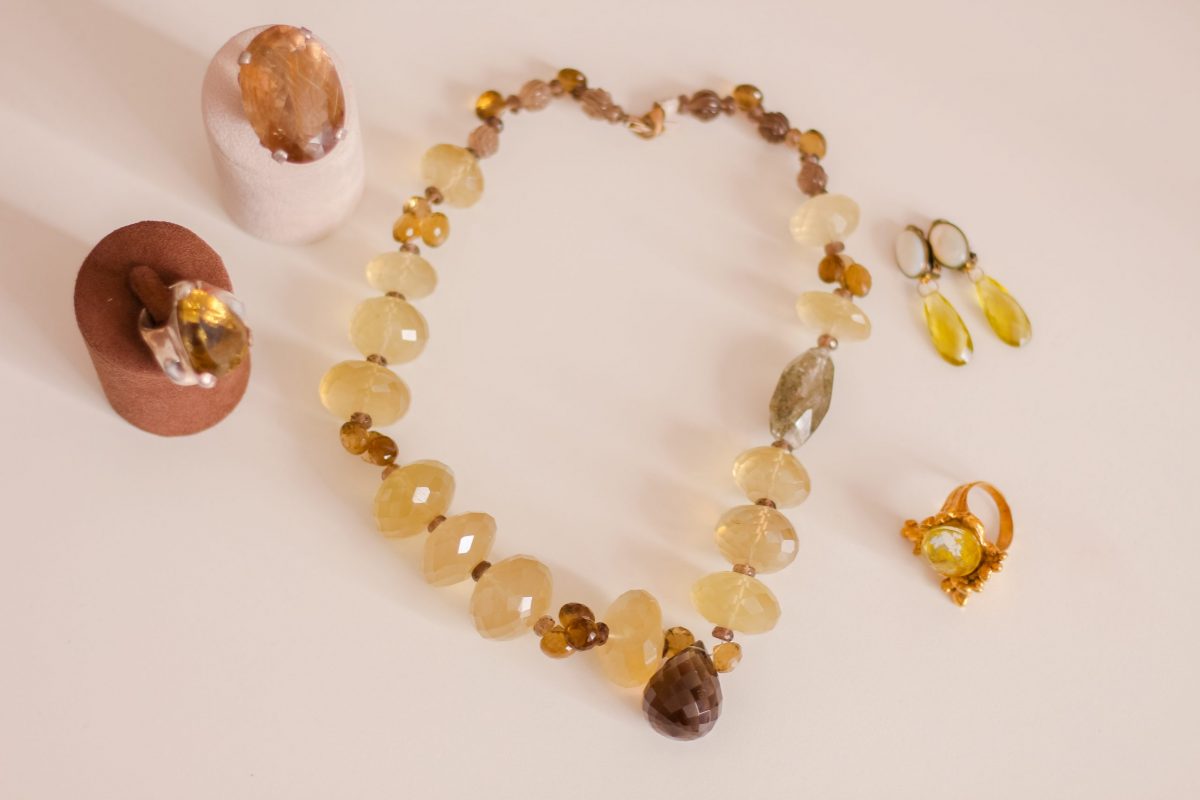 For this month of November, troubled by the world events we are witnessing, the OGGI team wanted to highlight the properties of lemon quartz. We have also associated rutilated quartz and smoky quartz which can be used as support at this time as well.

Lemon quartz (not to be confused with lemon topaz) is a quartz that has been processed ; it does not exist naturally. Quartz stone remains natural, on the other hand, the color is obtained by heating the stone which takes on this slightly lime color. This is what makes it unique.

Lemon quartz mainly comes from Brazil. It has the same properties as the rock crystal from which it comes. The properties of lemon quartz make it an energy amplifier, a transmitter and receiver at the same time.

Rutile quartz is also called hair of Venus because its inclusions of rutile crystals are reminiscent of golden hair trapped in stone.

Rutilated quartz has emotional and spiritual actions : in lithotherapy, it brings more cheerfulness to the mind (and we need it right now !). It forges the mind to express its personality straightforwardly, it will be useful to the timid.

Rutilated quartz is anti-fatigue, it has a good restorative action on injuries to tendons or muscles. It is a good ally for athletes to perform and recover faster from sports sessions. Rutile quartz also has a favorable action on the bronchi, asthma and epilepsy.

The smoked depths of this type of quartz inspired clairvoyants and fortune tellers, especially in the 19th century. Unlike rock crystal, which is perfectly limpid, smoked quartz ensured that they kept invisible to the eyes of laymen all the mysteries revealed to them by their balls of divination.

The 16th to 18th century Braemar Castle, located in the north of Scotland, contains a huge smoked quartz crystal that weighs over 23 kilos. Smoked quartz was widely used in Scotland, especially to decorate Scottish kilts and make pretty brooches, as well as dagger handles : called “sgian dhu”, these traditional Highland daggers are worn inside the sock so that we see exceed the handle. The latter should preferably match the brooch.

For the occasion, we have prepared a selection of jewelry in lemon quartz, rutilate quartz and smoked quartz.

We have a very gorgeous short necklace with beautiful cut volumes. This necklace is interesting by its asymmetry which gives it that touch of originality.

A piece that exudes modernity with its almost futuristic silver frame that sublimates a magnificent pear-shaped smoked quartz.

Bronze plated ring with a clear citrine. Original and elegant.

For a touch of light near the face, here is a cute pair of clip-on curls enhancing the smoky yellow of the fine stone with mother of pearl. 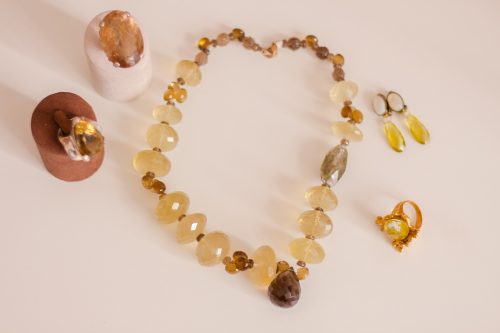